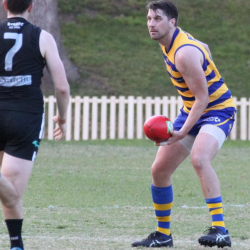 I started in 2017. After moving down from Brisbane, Syd Uni was recommended by a friend. I knew nothing about the club or the Sydney comp, but very happy and fortunate with the recommendation.

Which team mate would you want by your side during a zombie apocalypse?

Chris Reichman, he knows how to use a gun and is currently doing an IED course.

Team mate most likely to star in the Bachelor/Bachelorette?

William Stratford would be a great candidate; he is charismatic and a hopeless romantic, always asking the engaged boys how they proposed etc. It would also help with the shows diversity issues, they have never had an albino before.

Growing up who was your favourite player and why?

Do you have a pregame ritual/superstition?

I always bring both home and away shorts just in case.

Most embarrassing moment on the footy field (yours or someone else’s)?

Playing North Shore a few years ago in a Saturday night game. The NS big boy full forward who wears a glove was a bit angry because Jake Swarts defending him and doing typical Jake Swarts things. In addition, the rainbows boys in the grandstand were 10 deep and letting him know that he wasn’t good enough to wear a glove. The situation got the better of him and he threw a punch at Swarts. Luckily Swarts dodged the punch but you better believe he went down like he got hit. A small fracas broke out and the big boy glove wearing full forward fell through the fence. He also got red carded and while walking back to the sheds the rainbows generously offered some constructive criticism. This also doubles as the funniest moment on the footy field.

Best advice you’ve ever been given?