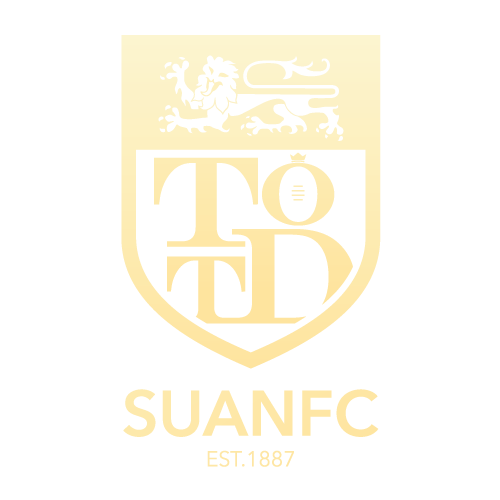 On Saturday 25th June, during Past Players Day celebrations, the 2011-2020 Men’s and Women’s Teams of the Decade were announced. 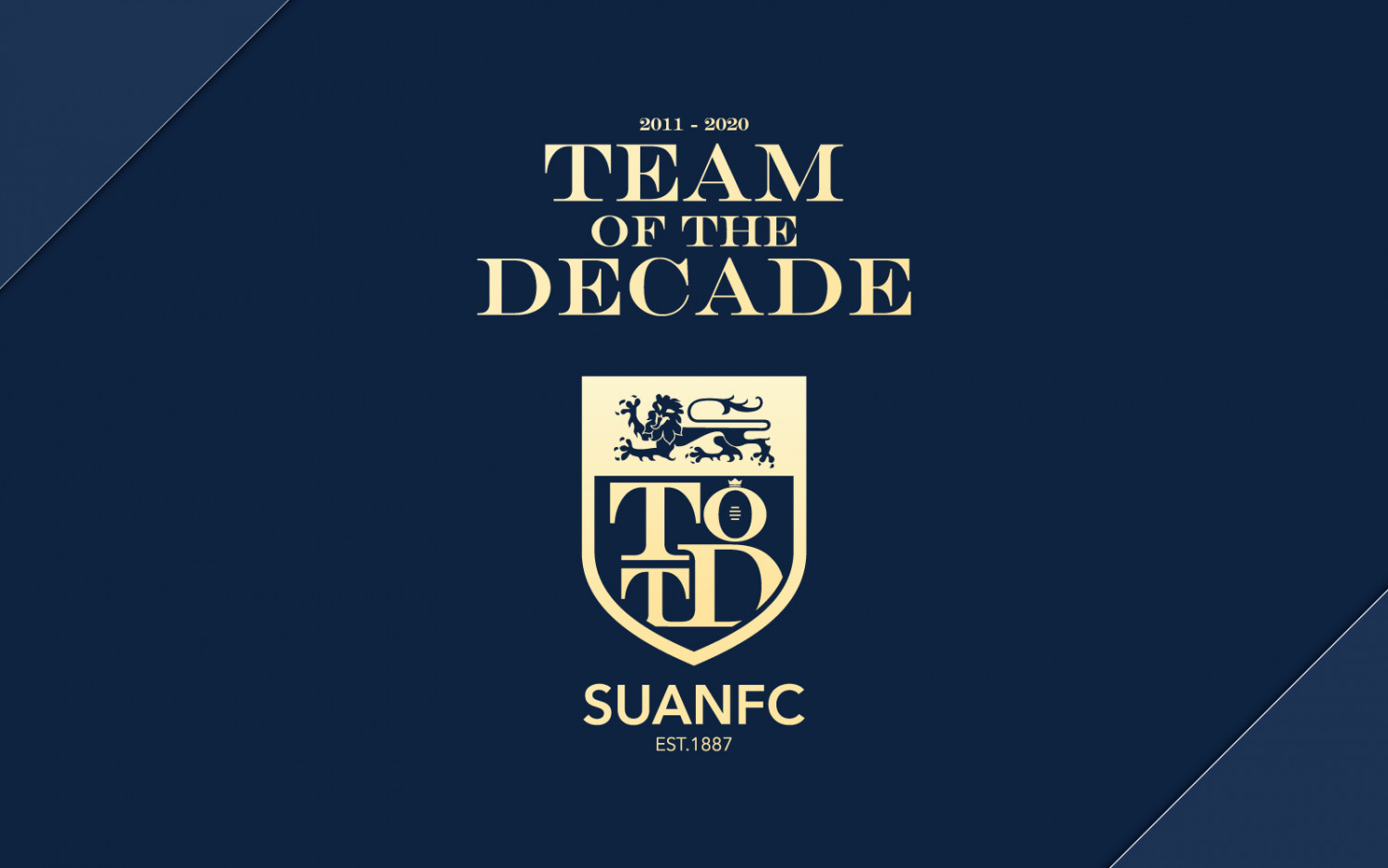 After a disrupted two years, SUANFC was excited to finally be able to recognise the club players and coaches, in both the Mens and Womens programs for the first time, who have been standouts and top of the field over the past decade.

It has been a big decade for SUANFC, with so many incredible results and achievements. Over the past 10 years (2011-2020), SUANFC fielded a team in the NEAFL competition from 2012 to 2019 and reached the finals series for five consecutive years; two Premierships have been won in the Womens Premier Division from six Grand Final appearances and one Premiership has been won in the Men’s Premier Division from four Grand Final appearances. With these incredible achievements, plus many more, it certainly wasn’t an easy task selecting from the large group of extremely talented players, however SUANFC is excited to announce the below 2011-2020 Men’s and Women’s Teams of the Decade: 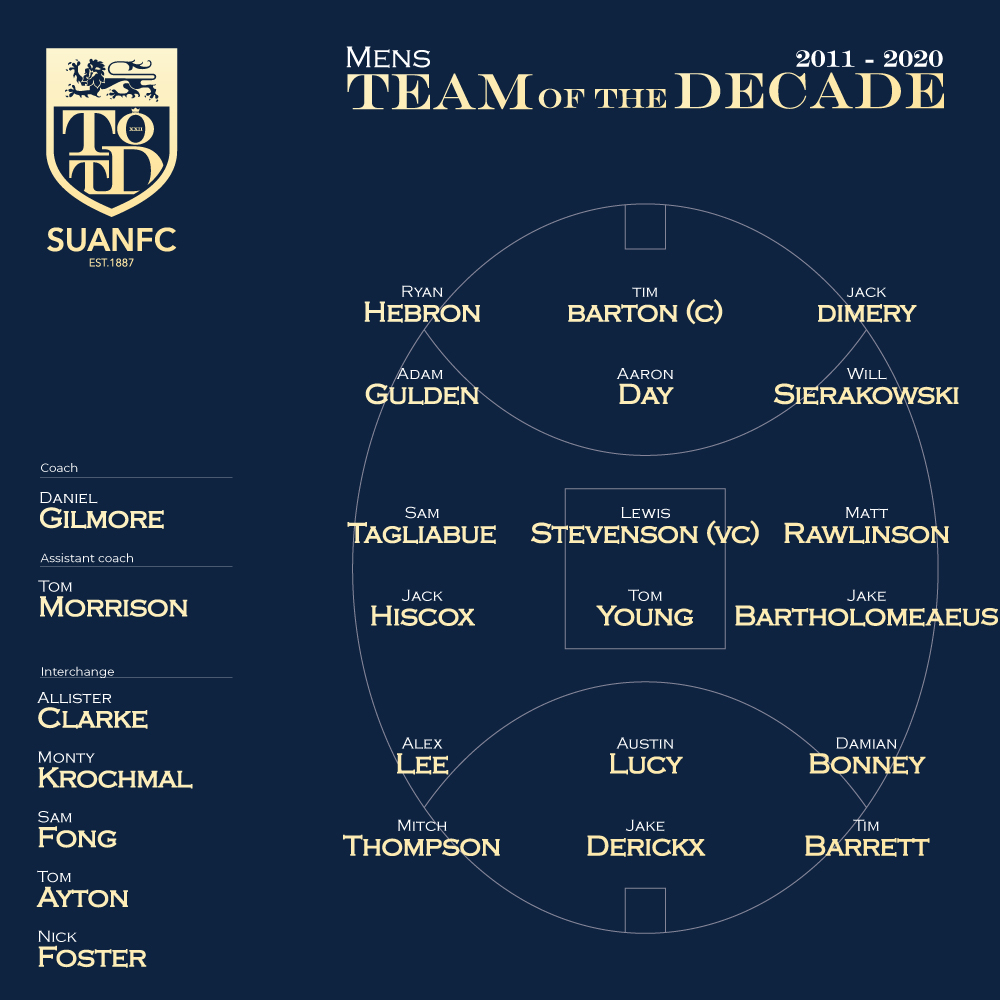 Full Back: Tim Barton (Captain)
Barton played 157 over the decade, 130 in the NEAFL competition. Barton was captain of the SUANFC NEAFL team, 2013-2015 and 2018, and also played in the NEAFL Representative team. Barton was the winner of the Tim Driscoll Medal, for SUANFC Senior Team Best & Fairest in 2011, 2013 and 2014. As a Sydney Uni Student, Barton was a member of the SUSF Elite Athlete Program, receiving his University Blue in 2010 and being named SUSF Valedictorian in 2016. Most recently, Barton was also a key member of the 2020 Men’s Premier Division Premiership team, and received the Rod Podbury Medal for Best on Ground.

Centre Half Back: Aaron Day
Day played 95 games for SUANFC, 65 in the NEAFL team, and finished 6th in the 2015 Timothy Driscoll Medal for Best & Fairest. Day was also an integral member of the 2020 Men’s Premier Division Premiership team.

Half back flank: Will Sierakowski
Sierakowski played 113 games for SUANFC over the decade, including 97 for the NEAFL team. Sierakowski polled in the top 10 of the SUANFC Driscoll Medal in 2016, 2017, 2018 and 2019, and was an key member of the 2020 Men’s Premier Division Premiership team.

Wing: Jack Hiscox
Hiscox played 97 games for SUANFC over the decade, 57 for the SUANFC NEAFL Team. An integral member of the 2020 Men’s Premier Division Premiership Team, Hiscox received his Sydney University Blue Award in 2020, and was also named 2020 Blue of the Year.

Half forward flank: Alex Lee
Lee played 41 games for SUANFC over the decade, 31 in the NEAFL team. In 2010, Lee was named AFL Sydney’s Phelan Medal winner and was Club-Co Captain in 2012.

Centre Half forward: Austin Lucy
Lucy played 85 games for SUANFC over the decade, kicking 42 goals in NEAFL games and 24 goals in AFL Sydney games over that time. Lucy polled 6th in the 2018 SUANFC Driscoll Medal, and was also a member of the SUSF Elite Athlete Program.

Half forward flank: Damien Bonney
Bonney played 77 games for SUANFC over the decade, 61 for the NEAFL team. In the 61 games, Damien kicked 78 goals and took out 2018 NEAFL Goal of the Year.

Forward pocket: Mitch Thompson
Thompson played 139 games for SUANFC from 2011-2020, 93 in the NEAFL team. Thompson was selected in NEAFL representative teams, and was a key member of the 2020 Men’s Premier Division Premiership Team.

Full forward: Jake Derickx
Derickx played 94 games over 5 season, kicking 193 goals in that time. In his debut season with SUANFC, Derickx won the 2014 Timothy Driscoll Medal, and was selected in the NEAFL Representative Side in 2014 and 2015.

Forward pocket: Tim Barrett
Playing 74 games for SUANFC over five season, 72 with the NEAFL side, Barrett received a number of accolades early on in his time with SUANFC.  In 2012, Barrett won the SUANFC NEAFL Rising Star Award, and also received a NEAFL Rising Star Nomination. In 2012 and 2013 Barrett was also the club’s leading goalkicker.

Rover: Matt Rawlinson
Rawlinson joined the SUANFC NEAFL team in 2014 and played 54 games over four seasons. In 2015, Rawlinson’s second season with the club, he took out the Timothy Driscoll Medal for Best & Fairest.

Interchange: Sam Fong
Fong played 70 games for SUANFC, 59 in the NEAFL team. In 2016, his second season with SUANFC, Fong finished fourth in the SUANFC Timothy Driscoll Medal. In 2019, Fong was chosen as co-captain of the NEAFL side.

Interchange: Tom Ayton
Playing 136 games for SUANFC, 93 in the NEAFL program, Ayton led the NEAFL team on numerous occasions as a Vice Captain and stand in Captain. Ayton played NEAFL representative football, and was also a member of the SUSF Elite Athlete Program, receiving his Sydney University Blue in 2015.

Interchange: Nick Foster
Over the decade, Foster played 78 games for SUANFC, 45 games in the NEAFL. Receiving the SUANFC Coaches Award in 2020, Foster was an integral member of the 2020 Men’s Premier Division Premiership Team.

Interchange: Monty Krochmal
Krochmal played 180 games for SUANFC over the decade, 93 in the NEAFL competition. A regular member of the NEAFL leadership group, Krochmal was also a key member of the Men’s Premier Division squad who took out the 2020 Premiership.

Coach: Daniel Gilmore
Gilmore took on the NEAFL Senior Coach role in 2013, as SUANFC transitioned into it’s second year in the NEAFL. In his four years as senior coach, Gilmore took the Sydney Uni NEAFL team from finishing 7th on the ladder and not making finals in 2013, to making it through to the Preliminary Finals in 2015 and 2016.

Assistant Coach: Tom Morrison
Morrison took the role of Senior Development Coach in 2013, stepping up to the NEAFL Senior Coach role in 2017. Taking the NEAFL team to semi finals in 2017, and elimination finals in 2018 & 2019, Morrison then led the Men’s Premier Division team to a historic Premiership in 2020 after taking on the Head Coach role. 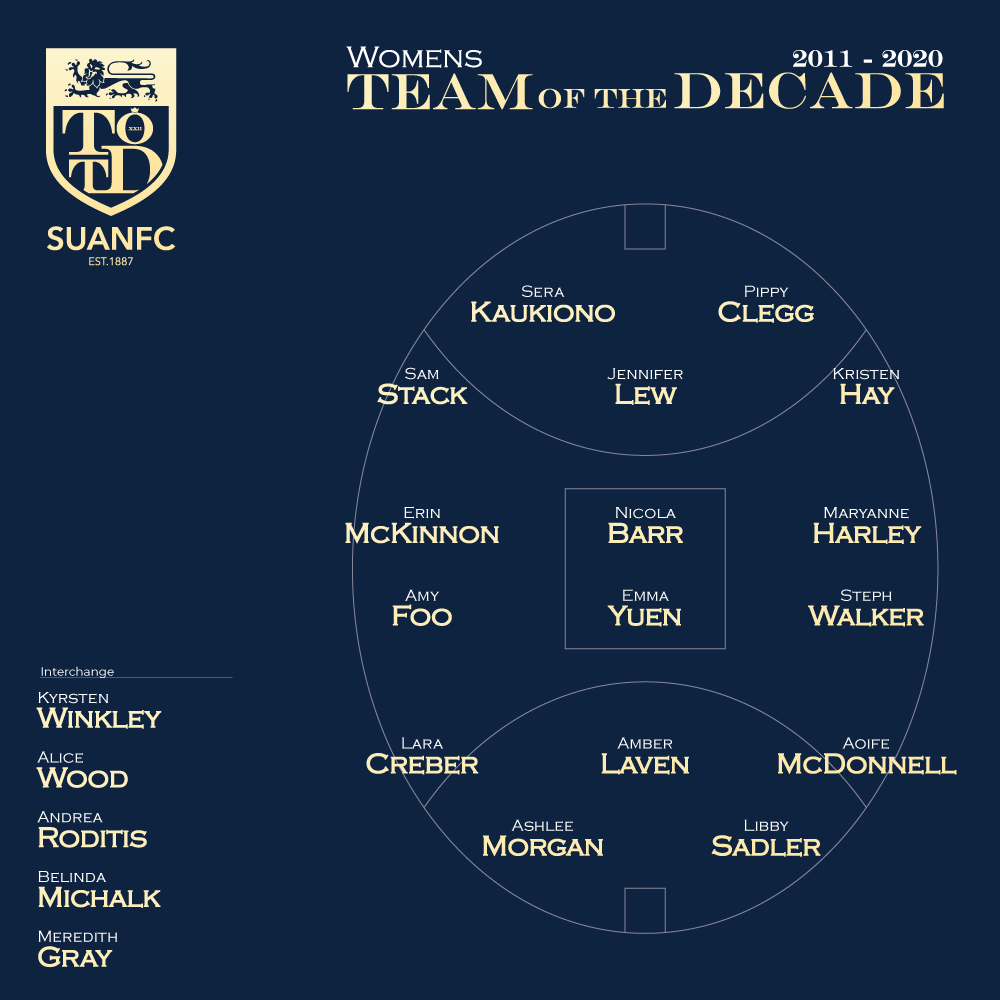 Half back flank: Sam Stack
Stack played an impressive 83 games for the club over seven seasons and was named in AFL Sydney’s Team of the Year for four of those seasons (2013, 2014, 2015, 2017). Stack accumulated an impressive number of awards during those seven seasons with the club also; AFL Sydney Best on Ground in the Grand Final (2013), AFL Sydney Leading Goal Kicker (2016), Club Players Player (2016), Club Leading Goal Kicker (2016).

Half back flank: Kristen Hay
Hay played 28 games with the club over two season, and in each season was named in the best for an impressive twelve games out of the season. Hay also received the Clubs Coach’s Award in 2018 and the Club Best & Fairest in 2019, was a member of SUSF’s Elite Athlete Program and was a GWS train on also playing in the VFLW.

Wing: Amy Foo
Foo, a member of the Women’s Senior Leadership team, played an impressive 96 games from 2013-2020 and was named in the AFL Sydney Team of the Year for 2016. Foo also received the Club Most Improved Award in 2016 and the Club Coach’s Award in 2018.

Centre: Nicola Barr
Playing 50 games over three seasons with the club (2015-2017), Barr achieved a number of league and club accolades, and in 2016 was the number one draft pick for GWS. In terms of league awards, Barr was names the AFL Sydney Rising Star in 2015, was the Mostyn Medal Winner for 2016 and named in the AFL Sydney Team of the Year in 2015, 2016 and 2017. As a Sydney Uni student while playing for the club, Barr was also a member of SUSF’s Elite Athlete Program and a recipient of the a Sydney Uni Blue in 2016.

Wing: Steph Walker
Walker played 54 games across five seasons with the club, kicking 29 goals in one season and making the best players 25 times. Walker was also a member of the leadership team and was named in the AFL Sydney Team of the Year in 2014 and 2015. Walker played representative football for NSW and won the club Leading Goal Kicker for 2014 and Club Blue & Gold Award in 2016.

Half forward flank: Lara Creber
Creber played 112 games for the club over the decade, was vice-captain and received teh Club Coach’s Award in 2013.

Centre Half forward: Amber Laven
Laven played 50 games over four seasons, and was named in AFL Sydney’s Team of the Year for 2014.

Half forward flank: Aoife McDonnell
McDonnell played 30 games over three seasons, and was named in AFL Sydney’s Team of the Year in 2014.

Forward pocket: Ashlee Morgan
Playing 70 games for the club, Morgan was named in the AFL Sydney Team of the Year in 2013 and 2014. Morgan also received a number of club awards; Club Person of the Year 2011, Leading Goal Scorer 2013 and Most Improved 2013.

Full forward: Libby Sadler (Vice-Captain)
Sadler played over 115 games during her impressive career with the club. Sadler was also named in the 2013 AFL Sydney Team of the Year, and the All Australian Women’s AFL Team for 2011.

Ruck rover: Maryanne Harley
Current Club Captain, Harley, played 45 games for the club over the decade. In 2018 Harley was named AFL Sydney Rising Star Runner Up, and also Club Rookie of the Year.

Ruck: Erin Mckinnon
Mckinnon played 32 games for the club over three season, and was drafted to GWS Giants. During her time with the club, Mckinnon was a member of the SUSF Elite Athlete Program and received a Sydney Uni Blue in 2018.

Rover: Emma Yuen
Yuen played 125 games over eleven seasons at the club. Yuen played NSW respresentative AFL, was named Club Best & Fairest in 2013 and was named in the SWAFL Team of the Decade.

Interchange: Kyrsten Winkley
Winkley was named in the SWAFL Team of the Decade, and played 86 games for the club.

Interchange: Andrea Roditis
Roditis played 37 games for the club over three seasons, and received the Club Coach’s Award in 2019.

Interchange: Belinda Michalk
Previous Club Captain, Michalk played NSW Representative football, and in 2011 was the recipient of the Club Best & Fairest Award. In 2015, Michalk was inducted into the Club Hall of Fame.

Interchange: Meredith Gray
Gray played NSW Representative football, and during her time at the club was named Club Leading Goal Kicker in 2015 and 2016.