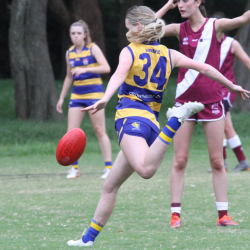 I started playing for USyd this year actually so I’m still pretty new! I decided to join the mighty Bombers because of their focus on player experience both on and off the footy field.

What hobby did you pick up in lockdown?

Well once it became clear TikTok fame wasn’t my ultimate destiny I decided to try and redirect my efforts to learning guitar – can’t say this was too successful either haha!

What’s your go to meal post-game at the Nags?

Team mate most likely to star in the Bachelorette?

Oh without a doubt the one and only Nikki S, she’d be lapping it up big time! She was born to be a bachelorette

Do you have a pregame ritual/superstition?

Coffee is love, coffee is life… There’s no way I could play a game without having a decent cup of coffee beforehand (and no I’m definitely not addicted what are you talking about…).

Which team mate would you want by your side during a zombie apocalypse?

Definitely Em G, her speediness would come in handy for a solid run away tactic.

Skydiving hands down!!! I’m going in a few weeks but none of my friends or family think I’ll actually do it; time to prove them all wrong – get keen to see the video footage.