In honour of Women’s Coaching Month, we celebrate the fantastic female coaches we have within our club. 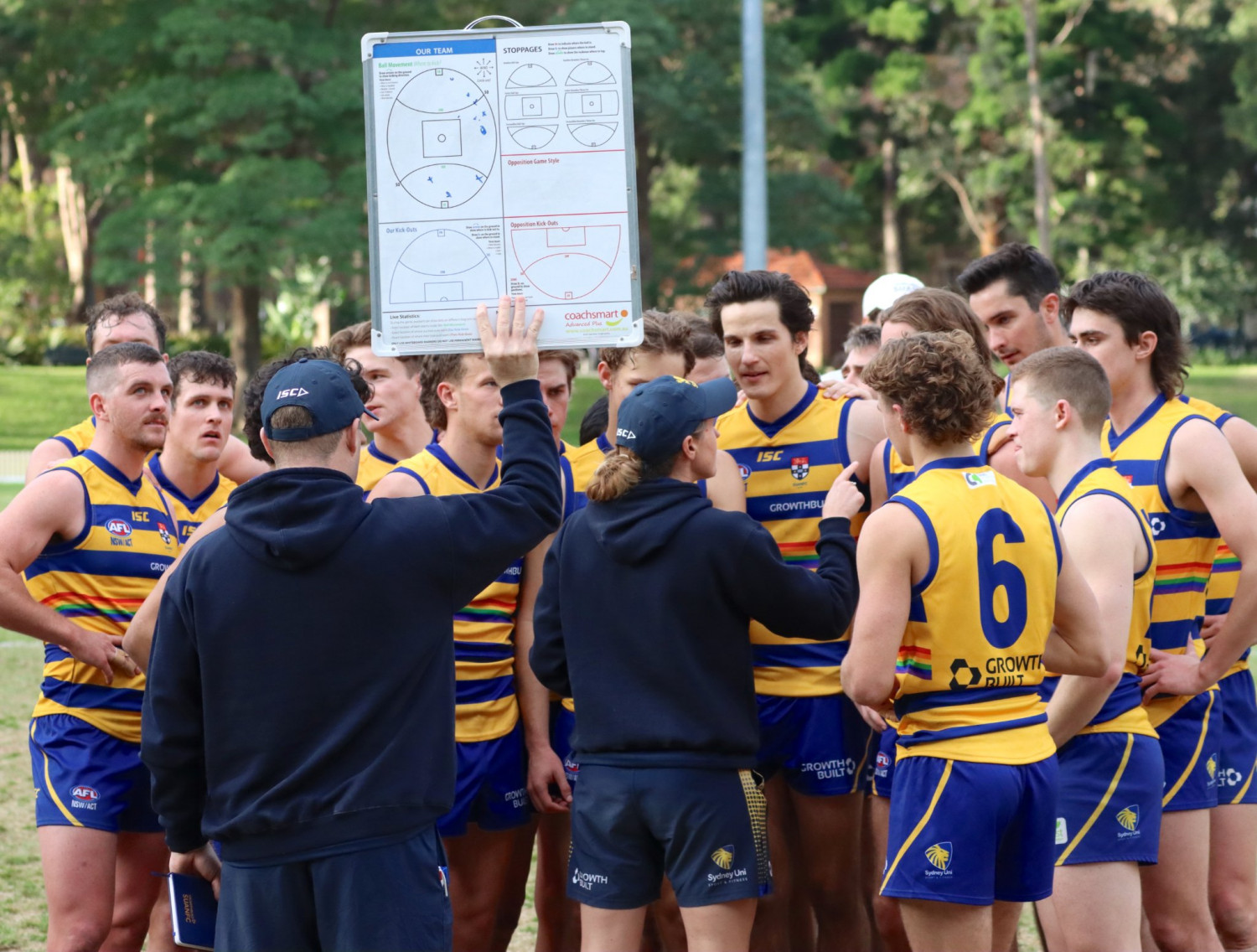 Within both our Premier Teams, Men’s and Women’s, we have impressive and extremely knowledgeable female coaches working in Assistant Coach roles.  This is something that is extremely exciting as we look towards the future and look to create more opportunities and see more Female Coaches rise up the ranks within the sport.

As part of our development program at SUANFC, the club looks to provide opportunities for everyone, including the coaches, to take on more challenges to extend themselves, ensuring everyone has the opportunity to learn and grow. In Rd 10 Head Coach Lindsay Scown stepped back, giving Dean the chance to prepare and coach her own side during the week, including the game day.

Scown was extremely impressed with how Dean took on the challenge; ‘Dean is a well established member of the Sydney Uni AFL family and the senior coaching group, currently in the role of assistant coach of the Men’s Premier Division squad.’

‘It was a seamless transition for Katie to step up into the role as she is very diligent with her preparation and her football knowledge is as good as anyone in Sydney footy.’

It’s no surprise Dean stepped into the role and coached her first game as Head Coach of the Men’s Premier Division side seamlessly and successfully- her passion for the game has been around since she was just a young girl watching the VFL on ABC.

Her first on-field experience in AFL could have been seen as a baptism of fire of sorts, as she began field umpiring boys up to under-18 at the age of just 14. However, the knowledge and confidence that Dean built up from that experience has no doubt been a major contributing factor in making her the well-respected and highly knowledgeable coach she is today.

Since joining SUANFC as a coach in 2019, Dean has been an integral member of the Men’s Premier Division coaching team, always taking on new challenges and taking every opportunity to learn, develop and push herself. SUANFC is extremely fortunate and proud to have Dean in our coaching ranks and we have no doubt that she is going places.

Mikaela Mahony came on board this season as the Women’s Premier Division assistant coach and has already made her mark on the program, building the reputation as an extremely knowledgeable, committed and easily approachable coach. Mikaela has been a player for 7 years, and was a valued member of the Sydney Uni Womens Premier Division squad, before an ACL injury in the first game of 2021 unfortunately sidelined her. The womens program, and the club as a whole, where extremely fortunate to benefit from Mahonys experience and knowledge when she made the decision to step into the coaching role.

Also within the women’s program, Megan Asquith this year transitioned from Women’s Premier Division player to Women’s Division 4 coach. Having played for the club since 2017, Asquith has taken a number of roles on and off the field. As the current VP of Women’s Football, Asquith is, and has been for a number of years, thoroughly involved in the promotion of women’s football and has been a key driver in the growth of the women’s programs at SUANFC. The Women’s Division 4 side has been flourishing with Asquith at the helm this year, and Asquith has been doing a great job in providing women who may never played the game before, an opportunity to join in and give it a go in an inclusive environment.

Are you interested in coaching AFL? There is a place for people of all levels at SUANFC, simply contact us at afl@sport.usyd.edu.au

Students to Contest Gordon Physick Cup back on Home Turf

SUANFC record strong wins over UNSW on Indigenous round